For several decades, United Nations climate change negotiations have been characterized by intensifying disputes around responsibility, equity, and financing, which have effectively created dividing lines between developed and developing countries. These issues were also central to the twenty-seventh annual Conference of the Parties (COP27) of the UN Climate Convention, held this November in Sharm el-Sheikh, Egypt.

It was a tale of two COPs. One tale told of a historic breakthrough in responding to developing countries’ demands around financing for climate-induced loss and damage — for many, a sign of moral triumph. But there was another story, one in which much-needed progress on climate change mitigation and adaptation was ultimately derailed.

There’s a Fund, but Where’s the Money?

As noted earlier this year, the international community’s success in adequately addressing the climate crisis will largely be determined by the ability of developed countries, who are disproportionately responsible for total carbon emissions, to cooperate fairly with the developing countries who are disproportionately impacted by the climate crisis. This differentiated relationship between developed and developing countries is codified in the Climate Convention under the principle of “common but differentiated responsibilities and respective capabilities”.

Yet tensions have arisen around this principle, most notably around the term “loss and damage”, which refers to the destructive impacts of climate change that go beyond what can be mitigated or adapted to.

The science is clear on this issue. As the sixth assessment report of the Intergovernmental Panel on Climate Change (IPCC) published just this year emphasizes, with the world currently at around 1.1C to 1.2C of warming, the consequences of climate change are unavoidable — indeed, many of these changes have already begun to cause severe loss and damage. The IPCC report stated that even if the world rapidly decarbonizes, the greenhouse gasses already in the atmosphere and current emissions trends would make significant climate impacts unavoidable up through 2040.

This year’s negotiations were held amidst particularly challenging global circumstances. The pandemic has weakened the economies of many countries, compounded by other challenges such as climate disasters and political instability, with several nations facing severe debt crises. The war in Ukraine and worsening energy and food crises are also feeding economic and social turmoil.

In the wake of the devastating floods in Pakistan, the grave implications of the yawning gap between the financing needed and what is available to developing countries can no longer be ignored — despite rich countries’ repeated attempts to downplay this fact. In that sense, the biggest win at this year’s COP was the unprecedented decision to establish a loss and damage fund to support developing countries recover from the impacts of climate change that are already being felt, whether from slow onset events such as rising sea levels, or sudden disasters like floods, cyclones, and heatwaves.

This landmark development was by no means an automatic victory or a foregone conclusion. For decades, developed countries have done their utmost to avoid treating like the issue like a legitimate question. Rather, the fund was won largely due to the persistence and unity of the G77 + China negotiating block, the group representing the developing world within the UN, alongside a very engaged and committed civil society.

The catch to this good news, however, is that the details of financing and accessing the fund still need to be worked out over the next two years. Nevertheless, this political agreement at the highest level of international climate diplomacy represents a significant shift in that it overcame the massive resistance to such a fund.

The struggle to secure adequate funding went beyond the loss and damage fund, as renewed financing for mitigation and adaptation also suffered. The pledge — which states that developed countries are to raise 100 billion US dollars in climate financing for mitigation and adaptation per year, and which many developed countries opposed — has not been delivered.

Despite this commitment being made over a decade ago in the 2009 round of climate talks, the COP27 final decision text could do little more than regretfully note that this commitment, due to start in 2020, remains unmet. The talks in Glasgow last year saw pledges to double adaptation funding by 2025, and although an additional 230 million dollars was pledged to the Adaptation Fund this year, the amount does not come close to covering what is currently needed.

One glimmer of hope in terms of climate financing were the clear demands for a reform of multilateral development banks, bringing their functions and services more in line with the specific needs of developing countries. This important development was likely in part due to the intense lobbying efforts of Barbados Prime Minister, Mia Motley, who led the Bridgetown Agenda — a policy proposal to fundamentally change the way that international financial institutions respond to the climate crisis.

Furthermore, financial discussions were no longer just limited to calls for resources to act on climate change, but also took account of the structural aspects that prevent developing countries from acting. This meant that calls for debt cancellation were heard alongside calls to transform international financial institutions.

Big Wins for the Polluters

When it comes to mitigation at COP27, the bottom line is we are no closer to keeping global warming below 1.5 C than we were before the conference began.

Shortly before the summit, the UN issued a bleak analysis of countries’ emission reduction targets. It noted that in order to keep global temperature increases from exceeding 1.5 C, what is needed is a 43 percent reduction of the 2019 levels in global emissions by 2030. However, the current commitments amount to a shockingly small reduction of merely 3.6 percent — a fraction of the action needed.

There was insufficient progress in closing this gap at COP, setting a dangerous precedent for the future. Moreover, no agreement was reached on the Mitigation Work Program, an initiative to rapidly scale up the ambition and implementation of measures for reducing atmospheric carbon and other greenhouse gasses.

Ending fossil fuel use was another important area in which urgently needed action was not implemented. Despite it being an obvious demand, negotiators had to struggle for almost 30 years just to have fossil fuels mentioned in the convention text at all.

India continued its efforts to push for phasing down all fossil fuels during the COP27, as opposed to just phasing out coal. The proposal was rebuffed last year, replaced with a compromise over a phase down of coal. Countries like the US rejected India’s efforts before subsequently blaming India for reducing its own ambition.

There was little progress on that front this year, with only broad language when discussing fossil fuels and ending their inefficient subsidies. There are fears that even progress achieved last year in Glasgow in terms of phasing down coal may be lost.

This year saw renewed efforts by developed countries to weaken the principle of common but differentiated responsibilities and respective capabilities. Richer countries pursued backhanded campaigns to avoid responsibility, such as broadening the categories of the key countries that need to cut emissions the fastest and deepest. The goal in doing so was to shift the responsibility away from those countries who have historically borne the greatest responsibility for global emissions onto developing countries with growing economies.

Another example of this course of action is the way rich countries like the EU tried to use clear and devious language to break up the joint positioning of the largest negotiating group of developing countries (the G77 + China). In one of their proposals on the loss and damage fund, they offered a solution that would serve only “vulnerable countries”, which risked creating cracks in the financial architecture of the UNFCCC. However, the largest negotiating group of developing countries remained united despite more or less diplomatic efforts of some representatives of developed countries.

Meanwhile, corporate interests were reflected in the inclusion of language around geoengineering and technical approaches for offsetting emissions, which ultimately serve as distractions from real mitigation efforts. Unproven technologies such as carbon removal made their way into the COP27 final decision.

The lack of progress on mitigation and the prominence of fossil fuel interests at COP27 are almost certainly connected. The undeclared presence of hundreds of fossil fuel delegates was brought up as a major issue at last year’s talks in Glasgow, and this year saw mounting calls to address the lack of transparency in the talks and the conflicts of interest.

Yet instead of improvement, we saw a 25-percent increase in such delegates, with the 636-delegate-strong fossil fuel lobby overwhelming the delegations of African countries and indigenous peoples. In opposition to this, 450 civil society organizations joined a call to “Kick Big Polluters Out” of the talks — a demand echoed by a number of Members of the European Parliament.

The final text of the COP27, the Sharm el-Sheikh Implementation Plan, includes human rights language demanding that parties should “respect, promote and consider their respective obligations on human rights” as well as uphold the rights of indigenous people, local communities, and migrants, among others. That said, there was serious pushback to upholding human rights-based climate action within the different negotiation tracks, despite parties collectively acknowledging the human right to a safe and healthy environment a few months ago at the UN Human Rights Council.

Furthermore, the human rights commitments made on paper were not reflected on the ground, with the repressive character of the Egyptian regime palpable in the negotiation space. COP27 was held against the backdrop of sharp criticism over the government’s human rights record and ability to host the conference effectively. Much of this criticism centred on Egypt’s treatment of prisoners of conscience, such as Alaa Abd El-Fattah, who was on hunger strike until the second week of the negotiations.

The Global Campaign to Demand Climate Justice held a press conference where Abd El-Fattah’s sister, Sanaa Seif, highlighted the injustices faced by her brother and hundreds of other Egyptians imprisoned for merely speaking out against the government. Even during the press conference, a pro-regime Egyptian MP tried to shut her down, demonstrating the regime’s attitude towards free speech and civil liberties.

Concerns mounted as Egyptian authorities were accused of surveilling and attempting to control civil society groups and country delegations during their stay at the COP. Even the lack of logistical support at the venue itself resulted in some people being excluded, given the lack of available meeting rooms for civil society activists to organize, the lack of access to negotiations, and the general disorganization persisting throughout the first week, such as a dearth of reasonably priced food.

Climate activists and other civil society groups attending the conference already knew how difficult and dangerous public demonstrations would be, but they were able to find other ways to make their voices heard. They did not let the repressive atmosphere take away from the symbolic power of direct actions held within the UN space. Various civil society observers organized protests to express their disappointment and anger around the human rights situation in Egypt as well as the lack of progress in the negotiations.

The COP27 was meant to be the COP of “implementation”. In terms of the loss and damage fund — a plan for paying the climate debt owed by the North to the South — it was a step in the right direction. But in the bigger picture, it ended being the COP of distraction, delay, and denial in the fight to limit global warming and strive for climate justice. 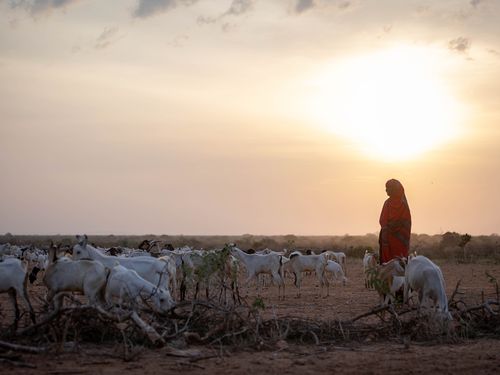